The island of Mauritius is located in the Indian Ocean, to the east of Madagascar, and around 2,400 kilometres (just under 1,500 miles) off the east coast of Africa. The island is also located in the Southern Hemisphere, just above the Tropic of Capricorn. 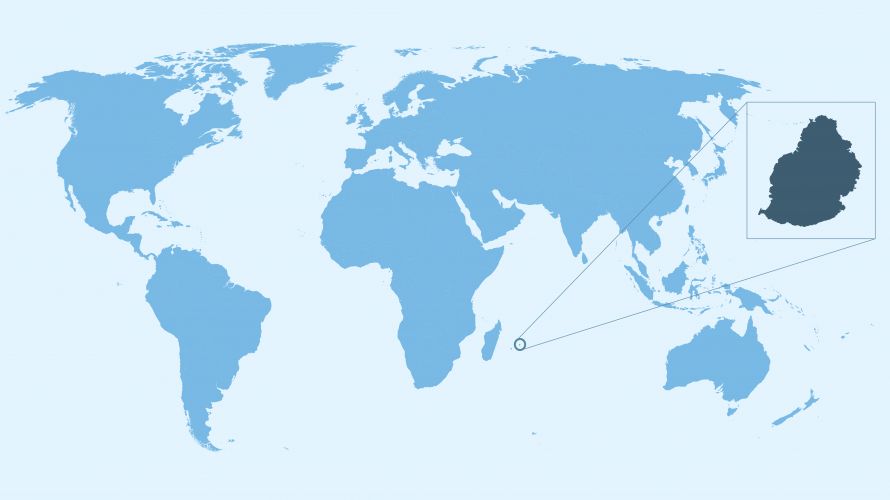 World map with the location of Mauritius

Despite its Indian Ocean location, Mauritius is an African island nation, officially called the Republic of Mauritius. The Mauritian territory also includes the island of Rodrigues, situated 600 km (372 miles) east of the Mauritian mainland. In addition to Mauritius and Rodrigues, there are two small dependencies to the north of the main island, Agaléga and St. Brandon. For simplicity’s sake, in our travel guide, the term ‘Mauritius’ will be used to refer to the main island.

How big is Mauritius?

The island is 61 km long and 46 km wide at its widest point (38 x 29 miles), and has 160 km of coastline (100 miles) and a total landmass area of 1,865 square kilometres (720 square miles), which is somewhere between the size of London and Luxembourg. It takes around one hour and fifteen minutes to drive from the northernmost point of the island to the far south, and about the same time to drive from east to west at the island’s widest point.

How long does it take to get to Mauritius?

Mauritius is about a 12-hour flight from Europe, 6 hours from Dubai, 8 hours from Perth, 10 hours from Hong Kong, and 3 hours from South Africa.

The island of Mauritius is, in geological terms, relatively young, having been created by volcanic activity around 8 million years ago. Together with Saint Brandon, Réunion, and Rodrigues, the island is part of the Mascarene Islands, which emerged as a result of gigantic underwater volcanic eruptions; however, there are no active volcanoes on Mauritius.

Mauritius is a picturesque island with rugged volcanic features and a large, fertile plain. The island is surrounded by white sandy beaches, many of which are protected from the open ocean by the world’s third-largest coral reef. This ring of coral surrounds almost the entire coastline, forming beautiful shallow lagoons. Mountains scattered across the island, tropical forests, and plants are some other features that add to the island’s natural beauty. In addition, some 49 uninhabited islands lie just off the Mauritian coastline, several of which are nowadays used as natural reserves for endangered species. 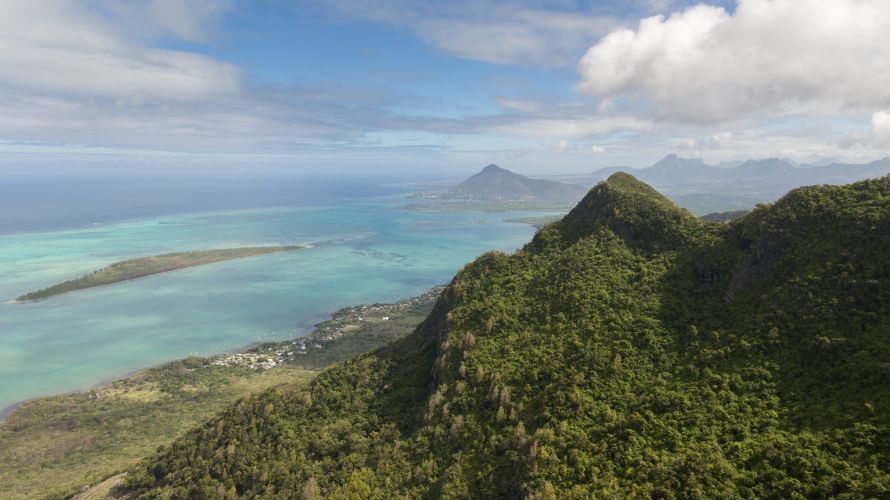 The nature of Mauritius is really impressive 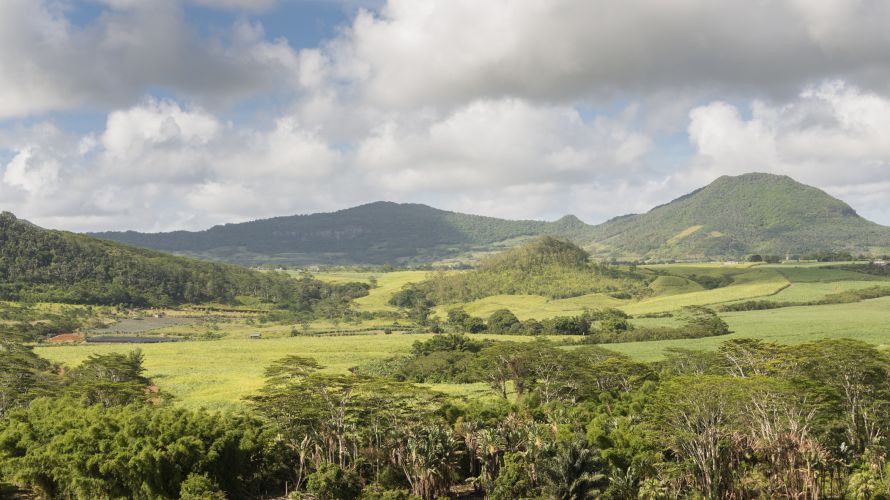 Mauritius is also quite mountainous, with mountain ranges varying in height from 300 - 800 m (1,000 - 2,600 ft) above sea level. The land rises from coastal plains to a central plateau at a height of around 670 m (2,200 ft), while the island’s peak is in the south-west, at Piton de la Petite Rivière Noire, which is 828 metres (2,717 ft) above sea level. Streams and rivers are dotted across the island, many of which run in cracks created by lava flow, and the island also has two natural lakes, both residing in old craters, as well as one man-made reservoir. 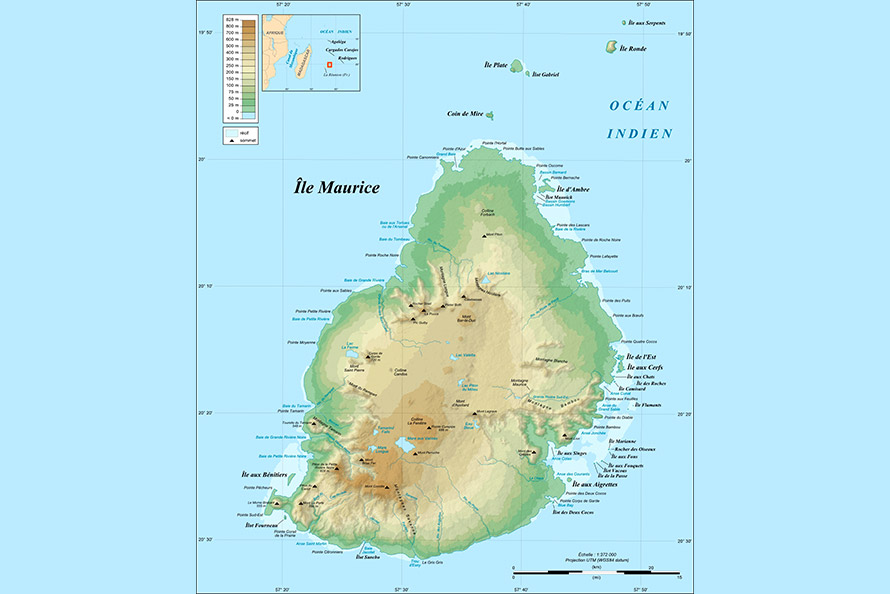 A topographic view of Mauritius

Mauritius is divided into nine districts. The capital, Port Louis, represents the economic, cultural, and political centre of the country, and is also Mauritius’ most-populous city, with around 150,000 residents. Other settlements on the island range from large towns with populations between 20,000 and 100,000 people, and over 100 small villages, with populations ranging from a few hundred to 10,000. 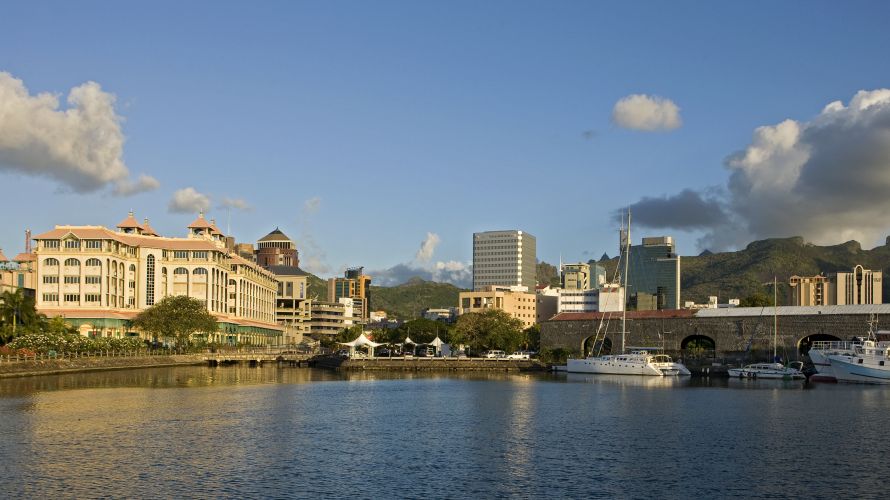 A topographic view of Mauritius

Although Port Louis in the north-west is undoubtedly the centre of business activity in Mauritius, the majority of those who work there prefer to live in the nearby towns and suburbs of the central plateau, which are comparatively cooler than the coastal areas. These towns include Quatre Bornes, Curepipe, Rose Hill/Beau Bassin and Vacoas/Phoenix. The only other sizeable town in Mauritius is Mahébourg in the south-east; the remaining settlements studded along the coastline are largely tourist resorts or fishing villages.

The island of Mauritius is home to one international airport, the Sir Seewoosagur Ramgoolam International Airport, which is located in the south-east of the island, close to the coast.

Mauritius has a relatively good road network, with over 2,000 km (1242 miles) of roads in largely good condition. Please note, in Mauritius they drive on the left, which requires constant attention from right-hand drivers. 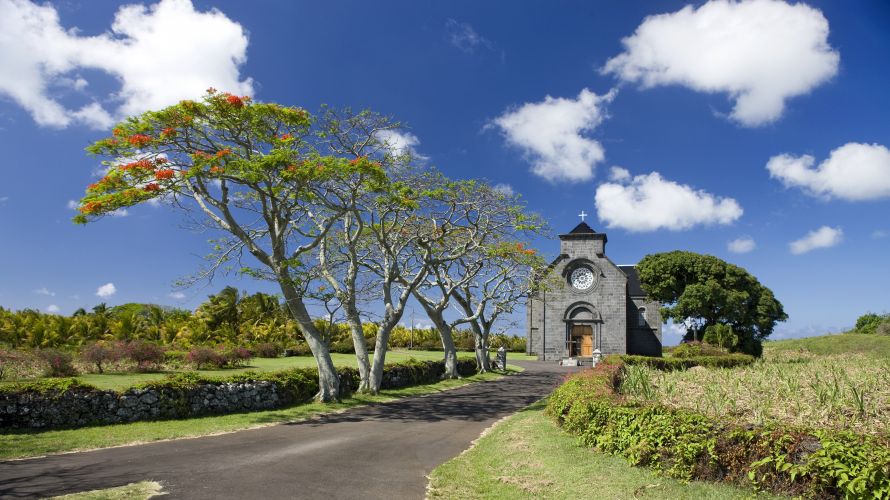 The Caudan Waterfront complex in the capital, Port Louis.

Mauritius has a widespread bus network, with around 220 bus lines and roughly 900 bus stops across the island. Bus services run all over the island, in urban, suburban, and rural areas. You can make use of all three main bus services depending on the region you are staying in.

Rodrigues is a delightful, remote island, 650 km (a little over 400 miles) east of Mauritius, in the middle of the Indian Ocean. Just 18 km long and 8 km wide (11 x 5 miles), Rodrigues is entirely surrounded by coral reefs, which offer world-class diving and snorkelling conditions. Rodrigues Island has a peak elevation of about 355 metres (1164 feet). The capital of Rodrigues is Port Mathurin, and the island is administered from Port Louis by the Mauritian government.

The Cargados Carajos Shoals, also know as the Saint Brandon Rocks, are a group of about 16 small islands north-east of Mauritius. These islands are classified as a dependency of Mauritius, and are administered from Port Louis by the Mauritian government.