The population of Mauritius amounts to around 1.3 million people and is relatively young, with a median age of 33.9 years old. Because Mauritius was uninhabited before being colonised, its current population is made up of the descendants of colonists, traders, slaves, and indentured labourers that came to the island after it was discovered. This results in a rich mixture of people with European, African, Indian, and Chinese roots, living together and respecting each other’s beliefs and lifestyles without losing their ethnic identity.

The 1968 Mauritian Constitution identifies four separate groups: Hindus, Muslims, Sino-Mauritians and the general population (of African and European descent). Each of these groups differs from the others in terms of religion, appearance and language; however, Creole is spoken by everyone (as well as English and French by the majority). In recent years, mixed marriages have become more common, blurring the lines between these groups. 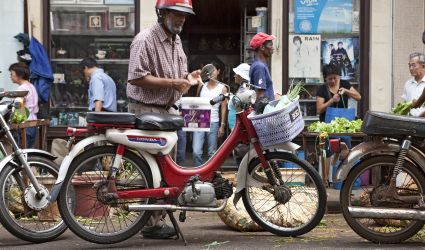 The colourful streets of the capital are stunning 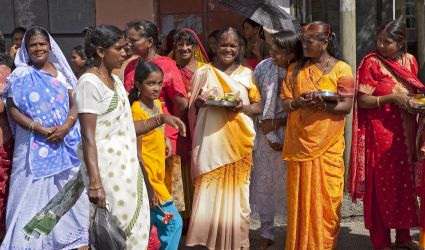 A lot of woman dress up in traditional Indian garments

Indo-Mauritians are the descendants of the Indian indentured labourers that arrived to Mauritius in great numbers from India after the end of slavery in 1835. After slavery was abolished in Mauritius, the need for labour increased dramatically. As a consequence, the indentured (or contracted) labour system emerged, where workers arrived from India (some also from China and Madagascar) to fill the void left by slaves, often working in the same, appalling conditions. By 1923, when indentured immigration stopped, it had brought almost half a million people to Mauritius.

Indian immigration has had an immense impact on the country, shaping its history and population; the Indo-Mauritians went on to take increasingly vital roles in the economic and political life of the island. People of Indian descent now make up the 68% of the population and represent the ethnic and cultural majority on the island.

Indo-Mauritians are divided into Hindus, some of whom are actually Tamils, and Muslims, who instead descend from traders who migrated independently from India and Pakistan.

Creoles are people of mixed African and European origin and constitute 27% of the total population. Most Creoles are Catholics; their language, Mauritian Creole, is spoken by all Mauritians and comes from the language used by slaves at the time of French colonisation. Compared to other ethnic groups, the Creole population faces more hardships, such as poverty, discrimination, and underrepresentation in politics, administration and business.

Sino-Mauritians are the Mauritians of Chinese origin. They are a small community, forming only 3% of the population, but their presence is very visible. They own many of the island’s retail outlets and restaurants and they influenced Mauritian cuisine greatly; the capital Port Louis even has its own Chinatown. This thin slice of population descends from Chinese people brought from Sumatra by the French in the 1740s, and from Chinese people that arrived in the 19th century to work or set up small businesses.

Franco-Mauritians are the descendants of European, mostly French, settlers, and are therefore mostly white. They make up only around 2% of the population, but own much of Mauritius’s private wealth and control a large part of the business world. 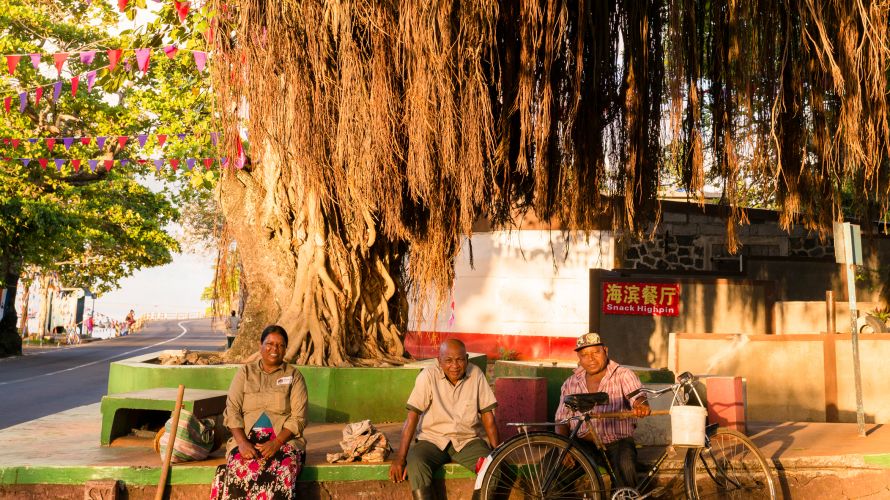 English is used in education, government, and business; most people can speak it if needed, but it remains a foreign language to almost everyone on the island, being no one’s ancestral language. For this same reason, it has a neutral and unifying effect and is acceptable to everyone. Its use as an official language is just one of the few reminders of the British administration. English is not used in daily life and the Mauritians’ knowledge of this language comes almost exclusively from textbooks. For this reason, the English spoken here tends to be very courteous; the use of slang or colloquial expressions might cause misunderstandings or come across as too blunt.

French used to be seen as the language of colonisers, but it now enjoys higher status and is widely spoken. It’s used in polite and formal circumstances, for example during job interviews, and is also common in education and in the media – the daily newspapers are predominantly in French, with occasional articles in English and Creole. French is also the language of literature, cinema, and television. Most Mauritians are more comfortable speaking French than English.

French used to be seen as the language of colonisers, but it now enjoys higher status and is widely spoken. It’s used in polite and formal circumstances, for example during job interviews, and is also common in education and in the media – the daily newspapers are predominantly in French, with occasional articles in English and Creole. French is also the language of literature, cinema, and television. Most Mauritians are more comfortable speaking French than English.

Other languages spoken in Mauritius include Hindi, Tamil, Telugu, Marathi, Urdu, Odia, Chinese and Bhojpuri. Most Mauritians are at least bilingual, if not trilingual.

Mauritius is a religiously diverse nation, with Hinduism being the religion of about half the population. The Mauritian constitution prohibits discrimination on religious grounds and provides for freedom to practise or change one's religion. Thanks to this complete freedom of religion, there has also been a proliferation of sects – nearly 100 religious denominations have been counted. 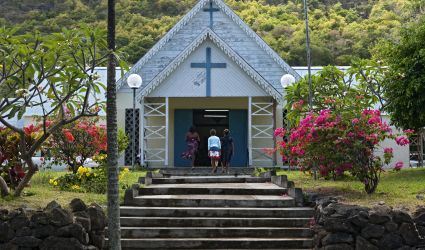 One of the many churches on Mauritius 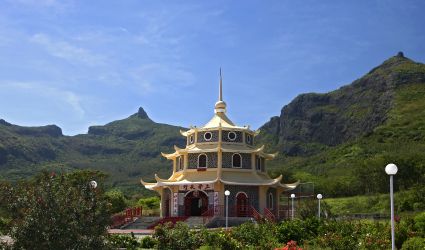 A traditional pagoda in Port Louis

Mauritians are a pious people and the number of churches, mosques, and temples proves it. Christian churches and Hindu temples can be found in almost every town and village. There are fewer mosques, but you can usually find one in the next village or nearest town. Buddhist and Taoist temples, on the other hand, are only found in Port Louis. The main houses of worship are open throughout the day and everyone is welcome to visit, as long as no disturbance is caused. Visitors should pay attention to the signs at the entrance and follow the instructions.

Education is Mauritius is free for everyone, up to secondary level. Education is compulsory up to the age of 16 and the country’s literacy rate is almost 90%, one of the highest rates in Africa. Since July 2005, the government also introduced free transport for all students.

Classes are conducted in English, but teachers often resort to French or Creole to explain concepts. The teaching of English and French is compulsory in all schools; students also have the option to learn any ancestral languages which are spoken in Mauritius. In 2012 the government also introduced Mauritian Creole in primary schools.

Music and dancing play an important role in the lives of the Mauritian people and are always present at family gatherings, festivals and celebrations.

The island, a cultural melting pot in the Indian Ocean, is at the crossroads of several musical styles. However, séga is the unifying musical genre. Séga refers both to a music genre and to the type of dance that is performed to these songs. Séga evolved from the spontaneous dances of African and Malagasy slaves, who, after a long day of work, used to create music with improvised instruments, and dance to it to forget their worries. The slaves sang about their suffering and their yearning for their land. At the time, music and dancing were prohibited among slaves, as they could lead to unrest on the plantation. In this sense, séga was a real act of rebellion. When Mauritius reached independence, séga was adopted as the national song and dance and it is still today very beloved. 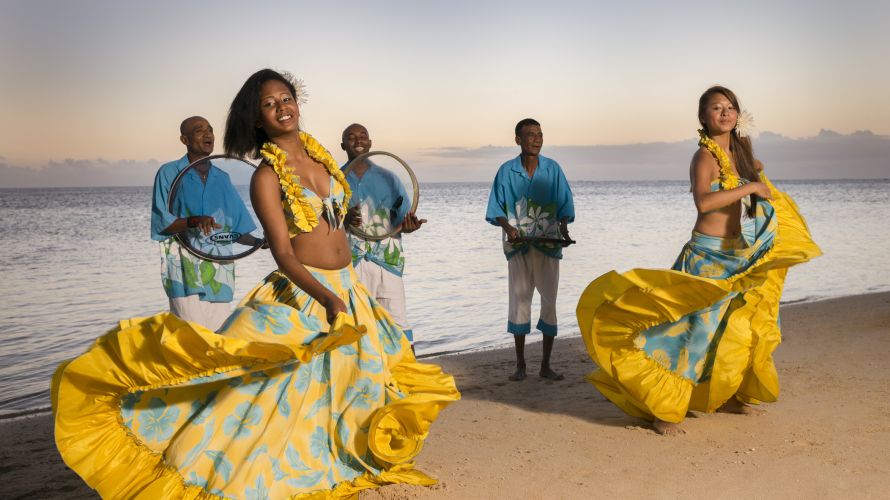 Sega dancing and sega musicians on one of Mauritius' many beaches

Although today’s séga is certainly not as emotionally loaded as the original séga songs sung by the slaves, it still is a pleasure for the eyes and the ears. Accompanied by either traditional, modern, or even “homemade” instruments, the singer songs about the tribulations of love or the humorous side of life. The instruments provide rhythm only, no melody. The dance is a series of shuffling steps, with hips swinging and arms outstretched, and although it resembles a courtship dance, it can be danced by anyone and on any occasion.

In its modern form, séga is often combined with genres like jazz, zouk, and its fusion genre with reggae known as Seggae. Elements of African music have been added to séga since the 1980s.

With so many different communities living on the island, the festivals celebrated in Mauritius are both colourful and varies. Check out or page dedicated to Festivals in Mauritius for a complete list of the festivals and what they’re about.

The island of Mauritius is home to many languages, and Mauritian literature exists in French, English, Creole, and Indian languages. Mauritian literature touches on many important themes that a broad scope of readers can identify with. Subjects such as interracial relationships, racial and social conflicts, and multiracialism are intertwined in the storylines of their literature.

Mauritius hosts the Le Prince Maurice Prize, which awards the best love story. In-keeping with the island's literary culture, the prize alternates on a yearly basis between English-speaking and French-speaking writers.

The best known of all the novels set in Mauritius is Paul et Virginie by French author Bernardin de Saint Pierre. Published in 1787, the book tells a tragic tale of the love and loss of a young couple during the French colonial period.